Do you prefer success stories for the individual (on the left side) or are you a numbers person who wants to see how much we are doing in Arizona (go to the Statistics Section).

Mary Alice is alone, on a fixed income. Her only companion is her tabby cat Sheba. The two share a meal meant only for one. 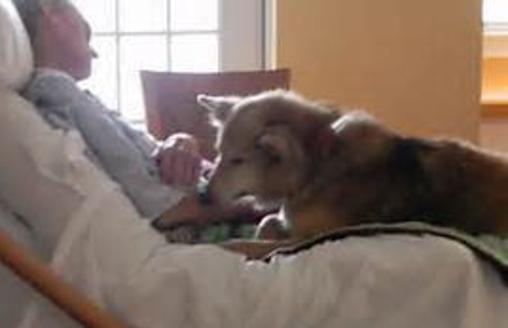 She wakes up in the morning to yet another day of pain.  She thinks about the endless medical bills and the fact that the house is tapped out of equity. Their savings, that they were going to using for their retirement, used up for medical expenses that the insurance didn’t cover. The doctors don’t seem to be able to find any treatment or medication to give her relief.  The children are grown up and on their own.

What is the point of trying to get through the day? 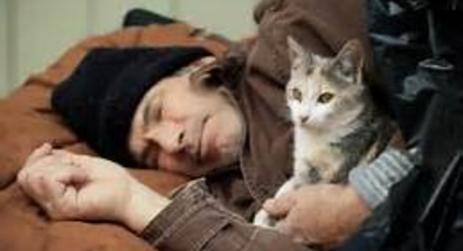 Tony lives on the street with Rockie.  He won’t go to a shelter because they don’t allow pets. Now he goes to a church where he can get cat food with his human food.

Through the day, Jeannine stirs out of the bed to walk the dogs, play with the dogs, feed the dogs. She decides to get help to feed her dogs because money is so tight, this way she wont have to chose between her medication and dog food tomorrow.  Her neighbor who drives her, tells Jeannine about Empty Bowl Pet Food Pantry Disaster Service. Eagerly Jeannine calls, only to learn they give food through non-profit agencies.

There is one for people who are chronically or terminally ill.

At first Jeannine refuses. After all, SHE gave help to agencies like that before things got so bad with her health and economy. Then she relents.  After all, she is only getting food for her beloved dogs.

When she goes, they ask her if she would like some fresh (human) food they have. And by the way, they have some things that would make her home safer.

A case worker says she knows some resources that would make Jeannine’s life easier.

Suddenly, Jeannine realizes that life doesn’t seem so awful, these people seem to care about HER.
All because she left the walls of her home to get pet food to ensure her dogs would be fed.

Isn't it ALL a disaster?

If you lose  you job/home, or get catastrophically sick or injured, home burns up,  community destroyed by wildfire or floods?

We are here to help, through YOU!

A lump stirs, under the covers, a head pops up and nuzzles under her hand more and more instantly, until she gives in and starts the morning pets.  For a precious few minutes she forgets about the pain as she finds all the special spots that Little Boy wants to get scratched.  Mitzi pops up, all she wants is F-O-O-D.  and pets (not necessarily in that order). With a smile, at the anticipation, in Mitzi’s stare, Jeanine gets herself out of bed to get doggies their breakfast.  Once in the kitchen, Jeanine decides to get some breakfast for herself, a critical decision for a brittle diabetic, with a heart condition.

For Rescue Success Stories:  go to our Rescue /Shelter Page. 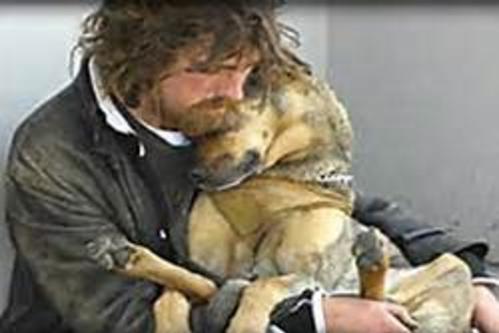 John lost his job and has no more savings. Now he’s going to lose his best friend of 8 years, Buddy, , because he can’t afford to feed him anymore. It breaks his heart when he tells Buddy that tomorrow he goes to the shelter. Buddy doesn’t understand what he did wrong. He will try to eat less.

Today, John and Buddy are still together and inseparable. Through your generous donations, Empty Bowl gave John enough dog food until he got a job and was back on his feet.

Maybe, Jeannine will help others with their pets.

She can hand out a bag of food, a smile a word of encouragement~ maybe giving hope over and over, will bring her hope too.  A ray of hope that something better is coming~because it just did! 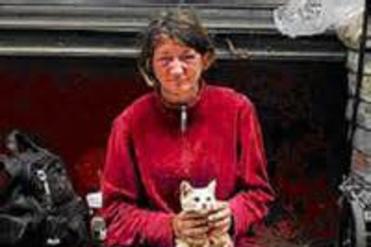 We help People like those listed below, who have benefited from Your Generous Donations. 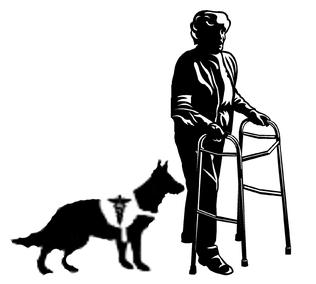