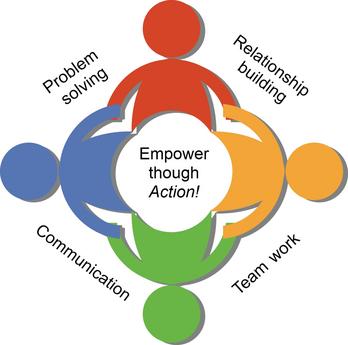 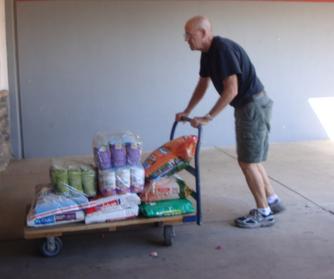 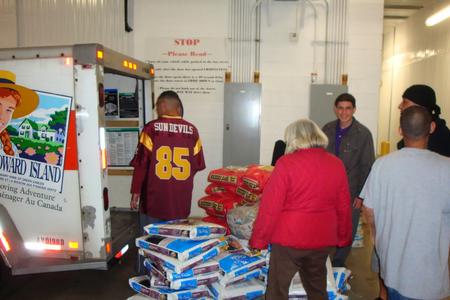 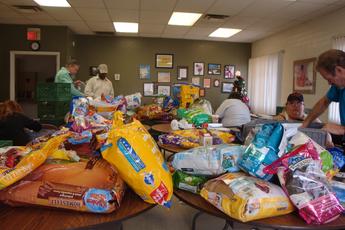 We help Rescues and Shelters that care for senior, disabled, ill/injured and rural animals with large gifts (300-3000 pounds) of the same kind or veterinary food/supplies.

In our work with Empty Bowl Pet Food Pantry, this trip to Mojave County has to be the most memorable so far. The rescue, who had suddenly acquired 124 new dogs, had quickly depleted their existing food supplies. Now there were over three hundred hungry dogs and not much food left to feed them as supplies ran low.

We were so grateful to have as our deployment center, Palm Gate Storage in Goodyear with the ability to drove in and load up in comfort on that cold and dark early morning on New Years Eve!

After our CEO got the call, we realized that we needed to deliver roughly three thousand pounds of dog food, dog treats, dog biscuits, and dog bowls to the Northwest corner of the state within forty-eight hours. We also brought around 500 pounds of cat food to replace those depleted supplies. The Rufff rescue had been using every resource they could get, to suddenly accommodate 124 more dogs, many of which had significant medical needs. A part of our vision is that our donations of dog or cat food to an organization will also allow that organization to use their limited supplies of money to pay for veterinary care that would have otherwise been needed to pay for the food. We knew that this project would require an extraordinary effort of veterinary care.

Wow, they had over three hundred dogs now to take care of.

The trailer and truck were full within just a few minutes.

As the trip started out, I had a picture in my mind of three hundred furry, tail-wagging friends, just awaiting our arrival. Ed reminded me that these dogs from Washington state might present to us, images that we might not find easy to witness. These dogs had been used as a profit center. They had lived much or all of their lives in crates, at a rescue that used them as a front to collect donation money. Each dog counted as one more animal that the former so-called ‘rescue’ could raise money from.

It is absolutely amazing ,that the Rufff rescue was willing to suddenly take on so many dogs with little notice. Out in the desert on a large piece of land a few thousand feet from a main road, there wasn’t really much out there other than the owner’s home, mostly undeveloped land, and the structures they had built on their land for the dogs. As we inched our way across a deep wash while pulling a trailer, and then down a dirt road toward Rufff, we passed another truck going the other way. The other driver observed the bags of food heaped high in the back of our truck and yelled out, “you’ve got the right place”.

No sooner had we parked the truck, than volunteers at the Rufff rescue were unloading for us. One said “take the dog biscuits down to the dogs right away”. It is amazing to me, that Rufff spends time socializing these dogs so well when there are so many of them to work with. I did see a fair number of volunteers working there. But the truth was undeniable. Those people do a good job of caring for the animals in their care.

I experienced something that was new to me when I was introduced to the goats at the Rufff rescue. Each goat has a name too. There were well over a dozen of them. Many of the goats came toward me, looking for attention, almost the same way a friendly dog would do. They also clearly enjoyed being petted and talked to. I was unaware that this species could be so social. The pig in the next pen however looked like he weighed more than I do. He seemed more interested in the food he was eating than in visiting with me. So I didn’t bother him <vbg>.

As Ed and I returned to Phoenix that night, we knew that we had done something really good that day. While we were actually on the trip, just enough funding had been donated to Empty Bowl to cover our expenses..

**********************************
When people ask for help with their pets, but not for themselves, we know this is a great opening to get them more meaningful help with human services because that is what REALLY helps those pets long term. Sometimes though, thanks to your help with volunteer time and donations, we can help rescues like this in emergency situations!

P.S.  Empty Bowl Pet Food Pantry is always looking for volunteers for several of the functions that we do. Sometimes, that work involves driving a large U-Haul truck full of food delivered from either local or out of state. Sometimes, the work involves working as a group, to break down 50-pound bags of dog food in to one-gallon bags to be delivered to food distribution activities such as United Way's Project Connect or Veteran's Stand Down.  We also need volunteers to help staff activity events most weekends of the year. We also need grant writers,, phone answerers, to help people get to the agencies that partner with us, and people to help load and unload large amounts of food from delivery trucks. Two to three times per year, we have large events where staffing of a temporary dog food distribution center is needed. This work is always done as a group of Empty Bowl Pet Food Pantry volunteers like Hope Fest, April 5 where we will helping 20,000 homeless/near homeless people with their pets at Chase Field, Phoenix. Volunteering at Empty Bowl Pet Food Pantry provides a good opportunity for individuals and groups to work together!